Um, Listen, I Think That Would Really Have To Be "Holy Horseshit" To You, Batman 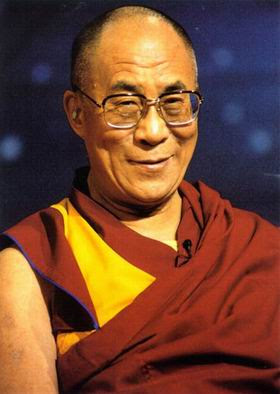 "His descriptions of Tibet convey, better than any propaganda, that region's steep decline. (The Potala Palace is now circled by swan boats, and Chinese officials, seeking to substitute flesh for spirit, have flooded Lhasa, the capital city, with hundreds of karaoke parlors and brothels, creating "a look that would not be out of place in Atlantic City.")

Even finer is Iyer's description of the Tibetan exile community in Dharamsala, India, a "wild bazaar of the sacred and profane" where monks stream out of Internet cafes, shops bristle with Tibetan tchotchkes, and a meditation center offers the following schedule: "Breakfast/ Impermanence and Death/ Suffering/ Selflessness/ Dinner/ Equanimity." Tibetan lads use their martyr mystique to woo girls and sponsors; signs like "Tibet Memory" and "Lost Horizon" wallow in old-fashioned Orientalism; and a thriving industry of beggars feeds off blissed-out Western tourists. (Not just Americans, either. At certain times of year, fully half the population of upper Dharamsala is Israeli.)

In the warmth of the Dalai Lama's bespectacled gaze, we can more easily forget the less attractive aspects of his thinking -- his endorsement of nuclear weapons in India, his acceptance of contributions from Japanese terrorists.

For Western audiences, at least, the message boils down to the equivalent of a Benetton ad: Be nice, live happy. No profession of creed. No radical redistribution of income. (Richard Gere did pay for the bathrooms outside the Dalai Lama's main temple.) Not much self-sacrifice. (Feel free to wave your "Free Tibet" banner at the Chinese Embassy.) Not even much in the way of guilt for the 6 million or so Tibetans under China's yoke.

With all due respect to His Holiness -- and with all due apologies for my Western bias -- this is horseshit."