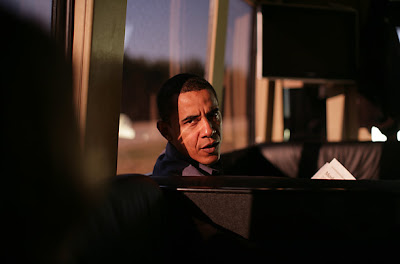 "Mantra meditation turns humans into zombies who serve [an] agenda,...that agenda is procurement of more humans and more human energy. This explains the common phenomenon of proselytizing by the religious, including fundamentalist Christians, TMers, and disciples of other varieties."

- From Bronte Baxter, writing in The Canadian

I've posted another part of this essay before*. I don't agree with all of it (he goes into a Bush thing at the end that makes me nauseous) but it still might be helpful, for anyone trapped in an Eastern spirituality haze, as a way to start breaking the spell.

I'm re-posting it to point out that it was written after Baxter took a trip to Fairfield, Iowa - the same place the Barack Obama cult started*: The TMers just added themselves to Oprah's "followers", stirred, and viola! We got The Cult of Obama.*

Anyway, the spell seems to have subsided, if not broken. I think we may have dodged a bullet on that one. Or Barack did, I don't know. Just don't vote for him and let's hope for the best. He might decide to confront his "followers" about the phenomena one day. If he ever does, he'd get my vote, for sure. But next time - not now. The fact he let it go as far as it did says he ain't ready: real leaders have to be aware of these things*. And if he is, and he let it go anyway, he ain't no real leader:

*I'll add the links tonight, but you can click the Meditation and Barack Obama tags (at the bottom of the post) and find the previous appropriate ones yourselves.
Posted by The Crack Emcee at 11:41 AM