Well, It Can Finally Be Said - LOUDLY: Shut The Fuck Up, You Stupid Unpatriotic Cowards - It's Your Mouth That's Getting Our Guys Killed!!! 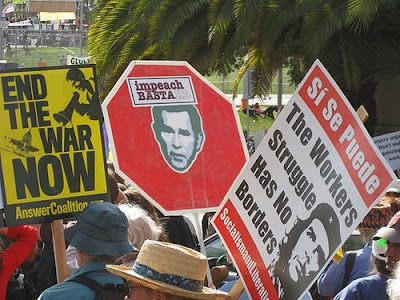 "Periods of intense news media coverage in the United States of criticism about the war, or of polling about public opinion on the conflict, are followed by,...quantifiable increases in the number of attacks on civilians and U.S. forces in Iraq.

The increase in attacks is more pronounced in areas of Iraq that have better access to international news media."

- From a recent study called "Is There an 'Emboldenment' Effect? Evidence from the Insurgency in Iraq." by Radha Iyengar, a Robert Wood Johnson Scholar in health policy research at Harvard and Jonathan Monten of the Belfer Center at the university's Kennedy School of Government. The study proves wartime complaints are hurting the war effort by giving hope, and confidence, to the enemy
Posted by The Crack Emcee at 11:00 PM

Email ThisBlogThis!Share to TwitterShare to FacebookShare to Pinterest
Labels: anti-war protests, Harvard, iraq war, Is There an 'Emboldenment' Effect? Evidence from the Insurgency in Iraq, journalism, Kennedy School of Government, patriotism, the war on terror