Another Passionate Pastor, Valiantly Saving Souls, And Doing It One Breast At A Time 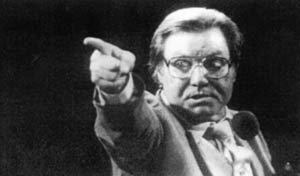 RIVERSIDE, Ohio - Police say a pastor who was reported missing from his home in western New York has been found - at an Ohio strip club.

The FBI and New York authorities had been searching for Rhodenizer, who disappeared Wednesday after telling his wife he was getting his computer fixed at Best Buy. Rhodenizer is the pastor of a church in Lyndonville, N.Y.

Yea, but I bet he also felt "spiritually refreshed",...

[photo, above, of Jimmy Swaggart in his heyday.]
Posted by The Crack Emcee at 8:15 PM