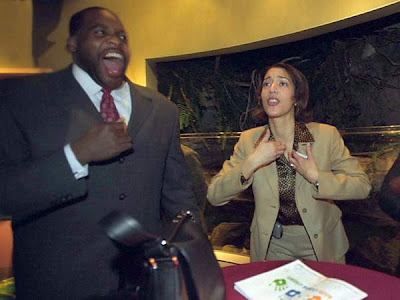 "Wayne County Prosecutor Kym Worthy will announce at 11 a.m. today whether she will file charges against Detroit Mayor Kwame Kilpatrick, his former Chief of Staff Christine Beatty and others in connection with the text messaging scandal.

The announcement follows an eight-week investigation that was prompted by a Jan. 23-24 Free Press story that revealed the existence of text messages showing that the mayor and his then-Chief of Staff Christine Beatty lied at last year’s police whistle-blower trial when they denied having an extramarital affair.

The messages also showed that they provided misleading testimony about firing former Deputy Police Chief Gary Brown in 2003 after he and former mayoral bodyguard Harold Nelthrope began asking questions about a rumored wild party at the mayoral Manoogian mantion and alleged misconduct involving the mayor’s security team – questions that threatened to expose the sexual affair."

- Taken from a Detroit Free Press report on the mayor, Kwame Kilpatrick (above, with is mistress) who claims "he is on a divinely-inspired mission to help rebuild the city"

I swear, I can't make this shit up. (They actually fired people so they could have sex?) Maybe I don't understand because I ain't "divinely-inspired", whatever that means. Oh yea - that means you lie, cheat, and steal with impunity. That's what that means.

And I love that photo: both of them look "divinely-inspired".