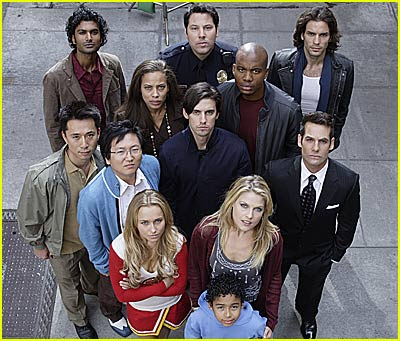 "[The] ambivalence between fealty and resentment is woven throughout 'Heroes.' The children must battle an evil organization known as the Company that was created by the previous generation, including Peter’s scheming mother, Angela (Cristine Rose), who in her salad days seems to have been something of a power-flower, a groupie in an idealistic cult that later turned monstrous. Yet even after learning of Angela’s culpability, Peter remains a loyal if somewhat surly son.

...Some of the most likeable characters are stuck mopping up their parents’ mistakes. In Season 2, after Peter manages to wrest back the vial containing the world-threatening virus and destroy it, his fellow hero Matt (Greg Grunberg), whose father was also one of the founders of the Company, is less relieved than disgusted. 'Your mother, my father, God knows what else they’ve done,' Matt says bitterly. 'How much longer are we going to have to clean up their mess?'

It could be a while."

-- Alessandra Stanley, who makes it sound like someone in Hollywood is finally starting to focus on the reality of dealing with American hippies who were in est, Landmark, Scientology, New Thought, NewAge, Buddhism, etc., for this paranormal drama, or so says the New York Times.