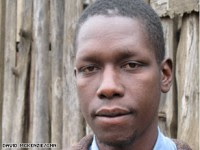 "Isn't it interesting that we keep hearing about Sarah Palin's peccadilloes while the major media continues to ignore the George Obama scandal? Here is a guy living in Third World poverty and his half-brother is the leading candidate to become the next president of the United States. Are the networks and major newspapers so exhilarated at the prospect of an African American president that they have become cheerleaders for the Obama campaign? Fortunately the McCain campaign is making the media an issue, and I hope the American people are smart enough to see through the news charade.

Here are the facts about George Obama. He’s in his twenties. He lives in a slum in a hut. He wants to become a mechanic but doesn’t have the money. He reports that he gets by on a dollar a month. He met George Obama in 2006 for a few minutes and said it was like talking to a “total stranger.” He said when people notice he has the same name as Barack Obama, he denies they are related because he is “ashamed.” The Democratic presidential candidate, who made $4 million last year, hasn’t lifted a finger to help his half-brother."

-- Dinesh D'Souza, who is raising money for the George Obama Compassion Fund, through Townhall.com.