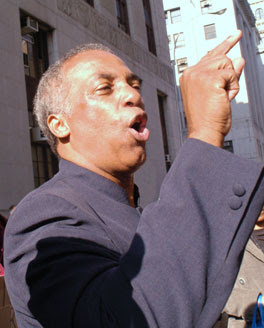 "The devil he will!

That's the opinion of local politicians of a move by Brooklyn Councilman Charles Barron to invite President Hugo Chavez of Venezuela to visit City Hall next week during the United Nations gathering of world leaders.

Acknowledging that the visit would be "a long shot," Barron praised Chavez as "a shining example of a humanitarian."

In a speech at the UN two years ago, Chavez mocked President Bush as "the devil."

Former Mayor Ed Koch called Chavez "a fascist," and added, "Barron has a right to invite anybody he wants, and everybody else has a right to moon him."

Councilman Peter Vallone Jr. (D-Queens) added, "If he wants to invite despotic dictators, he should invite them to his own house. They don't belong at the home of democracy in New York City."

Barron caused a furor in 2002 when he brought President Robert Mugabe of Zimbabwe into City Hall, despite Mugabe's sordid history of human rights violations, as documented at the time by Amnesty International."

-- Frank Lombardi,reporting on a New York crazy man, for the Daily News.