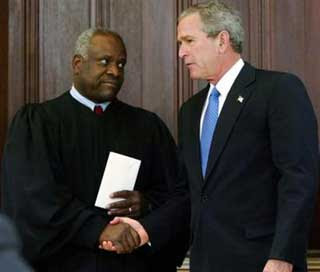 "It's not just his perception that the world mistrusts the abilities of the recipient of affirmative action but the fact that he sometimes learns to mistrust the world. Thomas' experience at Yale taught him to doubt anyone who sought to help him, especially those 'who offered you a helping hand so long as you were careful to agree with them but slapped you down if you started acting as if you didn't know your place.'"

-- Dahlia Lithwick, probably the only liberal to actually listen to Clarence Thomas (if only to use him against Sarah Palin) and write about it on Slate.com.

If the photo above confuses most liberals, here's one clear message you can take from it:

The Bushes are better than you.