Our Little Press Problem (Ain't So Little After All) 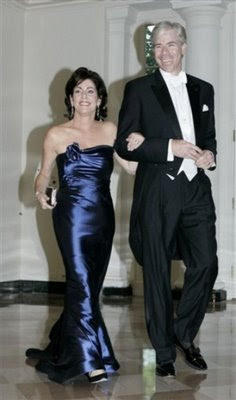 "Yes, they don't just cover for each other, they actually sleep together: David Gregory and BETH WILKINSON. Wilkinson served as the bankrupt Fannie Mae's executive vice president, general counsel and corporate secretary from February 2006 until just a few days ago when things got too ugly.

Beth Wilkinson and her lefty hubby, NBC's David Gregory. Yep, you can really tell they're looking out for you and all the little people. Don't they just look like they deserve to be bailed out by that tax paying pig farmer from Nebraska?

But don't worry, because David Gregory would never go on the air to report about this crisis without a disclaimer about his wife's role...oh wait....yes he would. and Oh yeah, financial records indicate that Beth Wilkinson has contributed $4,600 to Obama’s presidential campaign."

-- Neocon Express, ever-so-accurately describing the disaster American journalism has become and why.