Sit In The Dark To See The Light 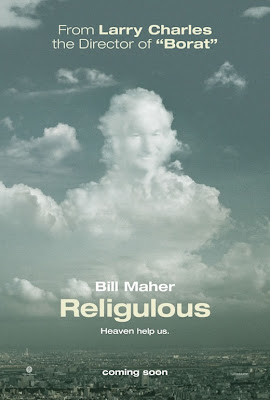 Such was the genesis of 'Religulous,' his controversial documentary in which he travels the globe interviewing Catholics, Protestants, Pentecostals, Muslims, Orthodox Jews, Jews for Jesus, Jesus impersonators and Scientologists. Attempting to put doubt in their mind, Maher instead winds up getting the old heave-ho.

To him, organized religion is the longest-running comedy act around. How else to explain religious lore, such as the ability to speak in tongues, live inside a whale, walk on water or father a child at age 500?

'I would like people who think more like me to understand that it is OK to stand up and say, 'We're not the crazy ones. The crazy ones are the people with the talking snake,'... "

-- Ruthe Stein, reviewing the new documentary on atheism, for the SFGate.