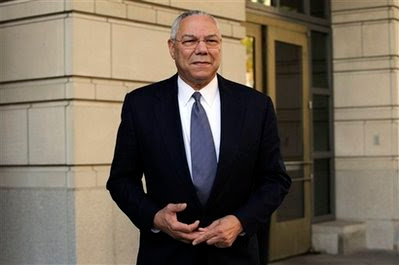 UPDATE: I didn't have a chance to get my thoughts down about this when I posted it (I was getting ready for work) but you can be sure, I am writing. For now, I'll just say I don't buy a word of Powell's lame excuses for this latest betrayal. For Colin Powell, this is about race and nothing more.

Considering the contradictions littered amongst his reasons in the press (I can't watch the actual broadcast at work) and being familiar with his history, both as a towering military figure and an extremely whiney politician, race is the only reason this can make any sense. If you can call it that.

And, like all racially motivated thinking, that's a mighty big "if". 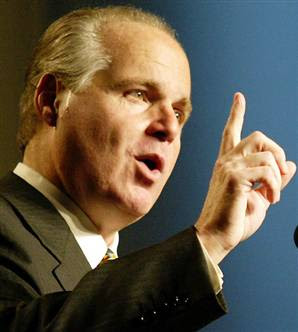 "Secretary Powell says his endorsement is not about race. OK, fine. I am now researching his past endorsements to see if I can find all the inexperienced, very liberal, white candidates he has endorsed. I'll let you know what I come up with.

I was also unaware of his dislike for John Roberts, Clarence Thomas, Samuel Alito, Anthony Kennedy and Antonin Scalia. I guess he also regrets Reagan and Bush making him a four-star [general] and secretary of state and appointing his son to head the FCC. Yes, let's hear it for transformational figures."

— Rush Limbaugh, who can also see through this race-based sham, and mentioned it to Politico.com 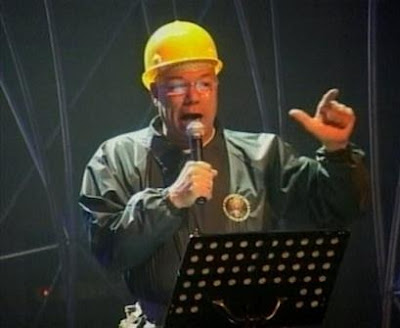 The Republicans were going to make Colin Powell president once - whew! - dodged that bullet! (Ha-ha!) Actually the only people on the conservative side who were afraid of the assassination of our potential black candidate were Colin and Alma Powell. That says a lot. It says, like Barack "guns and religion" Obama, there's a certain mindset that certain blacks hold, where they can't get over themselves, or the past, and they're going to hold the country hostage to their vision of that past, no matter what obvious changes have occurred. They've simply refuse to change with it. I mean, neither Colin Powell, or Barack Obama, will ever be confused with Martin Luther King, so what are they afraid of? 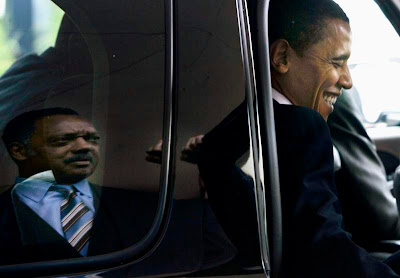 Let's be clear: Colin Powell, and Barack Obama, aren't "Americans", or even "black Americans", but "African-Americans". They're both a silly hyphenated formulation Jesse Jackson came up with, oh, so many years ago in an effort to make as much of a claim to this soil as he could muster. You either bought it or you didn't - I didn't - but most blacks did, and whites have gone along out of politeness. But it's a half-assed Americaness, at best; one of those sorry hugs you give to someone when you're forced to by circumstance, without the necessary bigness of heart one needs to make it real. (Or like trying to offend someone by calling them "the 'n' word" instead of "nigger".) And just as Colin Powell couldn't endorse Obama without taking a swipe at the Republican Party for imagined racial animosity, Barack can't get us to be "One America" with Jeremiah Wright, Father Michael Pleger, and Louis Farrakhan standing behind him. It just don't work like that, folks. 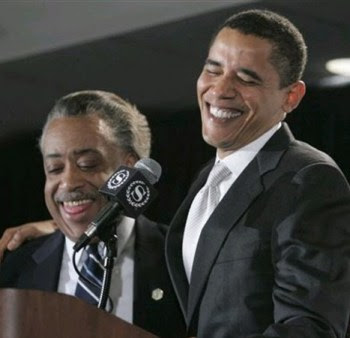 And that's one of the funniest things about Powell's endorsement of Obama: didn't he notice all those race-baiters Obama's hooked-up with? Of course not - this isn't about race - that's probably why he didn't mention any of the boogie men as he spoke of Obama's wonderful "judgement". Considering Wright and Pleger's over-the-top performances during the primaries, Barack Obama - or even the late Sam Kinison - could appear to have a better "temperament", too. 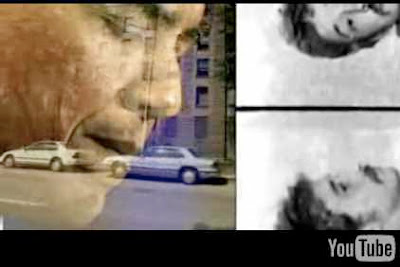 CP never mentioned Bill Ayers either, except to dismiss him, because Powell was "troubled" by his ever being mentioned in the first place. Imagine that. The potential President of the United States works hand-in-hand with a communist murderer and his friends, for decades, and it's those who bring it up that are put on trial. The fact the Barack lied about Ayers, repeatedly - especially in the last debate where he denied the easily provable fact of starting his political career in Ayers's home - is never mentioned as "troubling" by Powell or anyone else. And that's the most troubling thing about this whole charade: the cultism. 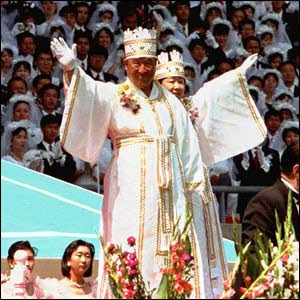 I know, I know: I'm supposed to be writing about Colin Powell and race. But multiculturalism is as NewAge as crystal gazing, so fuck the bullshit, I'm going there: "there" being the fact there are so many topics surrounding Barack Obama that have been deemed off-limits to polite (or hostile) conversation it's crazy. Everytime somebody white tries to discuss some unpleasantness or another, Obama screams "racism" (there - you happy?). Mention Obama has done things that hurt blacks, and even black people scowl at you. He's the Rev. Sun Myung Moon of black culture. 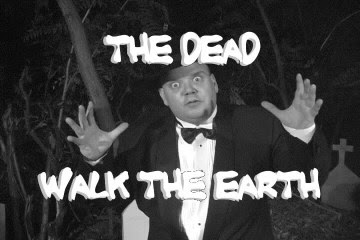 So let's see: On one side we've got John McCain and the Keating Five Scandal, in which he was exonerated - with even the Democratic lead investigator saying "John McCain is an honest man." On the other side, we've got Barack Obama with a cavalcade of sins that are now so long, and so weird, I hesitate to start listing them for fear my fingers will be stubbed out by the time I finish - if I ever do finish. That's how long it is, and, considering I discover a new lie daily, that list is probably getting longer by the minute. And still, two weeks from election day, people insist he's a viable candidate. People, if this isn't a political cult, then I don't know what is. Either that or I'm trapped on Zombie Island.