Sustainable Liberalism In a Box (Unsustainable) 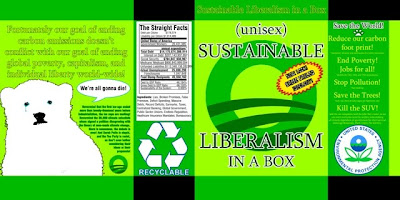 It's funny, how the timeliness of a subject can erupt in several places at once, making it seem like one of the prevailing issues of the moment.

For the last couple of days I've been discussing the sacrifices I've had to make, and some of the problems I've encountered, since revealing myself as a conservative artist. To the question of what would happen if a female conservative artist "came out" I wrote:

I think her experience would be much like mine:

She'd find herself standing alone, with a bunch of snarling Leftists - who know who she is - doing everything in their power to tear her down in any way possible.

And that's exactly how it's been. Now comes the tale of Steve DeQuattro's "Sustainable Liberalism In a Box" and New York's Pratt Institute:

You don’t have to be an art critic to see something tasteless going on at Pratt Institute. Since 1887, this venerable New York institution has been dedicated to educating “artists and creative professionals to be responsible contributors to society.” Yet teachers and administrators at Pratt have been nothing but irresponsible in their recent dealings with a fifth-year drawing student named Steve DeQuattro.

Mr. DeQuattro is a political artist. He uses his background in graphic design to illustrate the dominant political culture of his world. At Pratt, this means creating work that addresses, as he wrote to me, the “growing bureaucracy, higher tuition, new buildings for administration, new offices, and departments, and left-wing bias, all at the expense of the students.”

As part of his recent work, Mr. DeQuattro has designed a cereal-box-like sculpture that he calls, ironically, “Sustainable Liberalism in a Box” (the graphics are pictured above). He has developed a piece that takes the ubiquitous Apple iPod ad campaign to address abortion. He has designed a sobering five-foot-wide mural that tracks the Democratic Party’s record on race, from Jefferson’s slave-holding days up through the racially charged speeches of Senator Robert Byrd and Vice President Joe Biden.

As a senior in the school, Mr. DeQuattro has been working on this art in preparation for a group show for Pratt’s graduating students, which is scheduled to open on April 23. While his faculty advisor has been supporting him, his peers have not. Mr. DeQuattro says they recently wrote a letter to his professors, calling his work “offensive” and complaining about exhibiting alongside him. Last week, the chair of the fine arts department stepped in to prevent Mr. DeQuattro’s participation alongside the other students in the group show--an unprecedented move in the history of the department, says Mr. DeQuattro, despite the fact that none of his work is pornographic, libelous, or in violation of the laws of free speech. Mr. DeQuattro's advisor did not return a request for comment.

For the administrators and students at Pratt, the problem isn’t political art itself, says Mr. DeQuattro, but the nature of his politics, which are conservative. He says his school takes a liberal position on politicized discourse, just as long as that discourse does not deviate from a left-wing position. Pratt’s opposition to Mr. DeQuattro’s art only underscores the importance of his work. Mr. DeQuattro is asking for outside help in convincing the institution to support his exhibition.

I wish him luck and hope I'm doing my part by publicizing his plight. The way liberals "work" is as disgusting as how they "think" - any underhanded trick will do, whether it's going to DeQuattro's professors, or any of the many things that have happened to me - they're all discriminatory, wrong, and the height of liberal fascism. Especially in the world of art, where I have spent my entire life, there is no place for trying to silence anyone ideologically opposed to you. But silencing others is the liberal's stock in trade - just as we've seen in Wisconsin when the Democrat 14 ran away, rather than allow a vote on issues the people had voted for in the previous election. They're now trying to sell themselves as heroes for doing so, but the truth is they're cowards - cowards without the courage of their convictions to be "politicians" sent to serve.

Needless to say, it is my opinion Steve DeQuattro's fellow students are no more deserving of the title "artists" either.