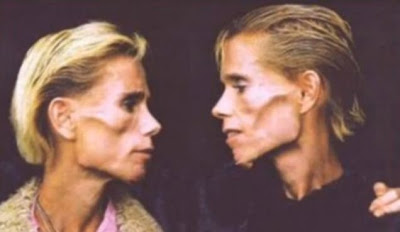 I told you yoga is a cult, and The Huffington Post's Arianna Huffington is a cult leader, so what's the natural progression from there (Other than our own self-destruction)? You guessed it:

Good ol' Arianna Huffington - until she's stopped (or gathers anyone's on to her) that bitch won't quit.

Speaking of not quitting, I used a photo of the anorexic twin sisters who recently died together in a fire. Pretty bizarre since anorexics can't usually see what's happening to themselves - the mirror image of being twins must've been a death knell for both of them. Sad shit, man.

If you're someone "concerned about your weight," and it's basically normal, do me a favor and be sure to check out the latest study on Calorie Restriction and Longevity.


It won't save your life, but it might calm-you-the-fuck-down a little bit - you need it,...