Oh: It's Not Wrong If A Black Man Does It 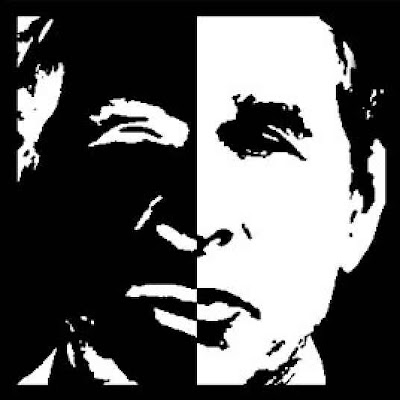 "On April 21, 2008, the day before Pennsylvania's Democratic primary, Barack Obama sat at the counter of the Glider Diner in Scranton. Senator Bob Casey Jr., who had endorsed Obama and was traveling with him throughout the state, occupied the next stool. It had all the makings of a great photo-op--home state senator, local eatery, lots of cameras. There was just one problem: those pesky reporters.

As Obama cut into his butter-soaked waffle--fork in his left hand, knife in his right--one newshound wanted the candidate's reaction to the news of the day. Former President Jimmy Carter had traveled to the Middle East to meet with leaders from Hamas. In an exchange during one of the primary debates, Obama had promised that his administration would seek to engage America's enemies--a position that Hillary Clinton had called 'naïve' and 'irresponsible.'

'Senator, did you hear about Jimmy Carter's trip?'

'Why is it that I can't just eat my waffle?' Obama snapped with his mouth full,...[Underlined emphasis TMR's]

In a New York Times Magazine profile of Robert Gibbs, the incoming White House press secretary, Mark Leibovich reveals that the Obama campaign emulated the 'Bush model' of tight information control. Campaign manager David Plouffe acknowledged that they 'talked a lot about the Bush model' inside the campaign and, like the Bush White House, sought to limit the spread of information internally so as to avoid the leaking that badly damaged the campaigns of Obama’s rivals.

There are other similarities. During the 2004 election, Dick Cheney famously kicked the New York Times off his campaign plane. Obama apparently did the same to three newspapers this fall–the Washington Times, the New York Post, and the Dallas Morning News–all of which had endorsed John McCain. At the time, the Obama campaign cited space concerns. But when Leibovich asked Gibbs whether reporters were kicked off the plane for considerations other than space, Obama’s spokesman first said 'no' but later amended his response. 'On occasion, yes,' Gibbs said, adding that such instances were infrequent. 'I mean, were there occasions? Sure.'"

-- Stephen F. Hayes, noticing those who didn't want "Bush II" are getting it anyway - and not complaining: because it's their guy doing it now - resulting in a hypocrisy that's become The Weekly Standard.