Raw Like Sushi (This Ain't No Bread And Fishes) 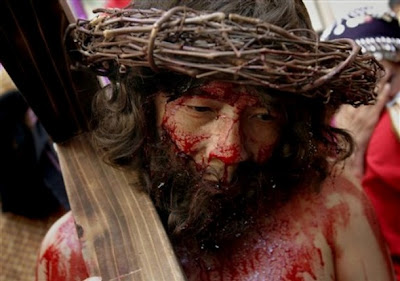 On Dec 25, the round-faced Mr Sawaguchi will get up in the icy predawn of northern Japan, put on his uniform of suit and tie and head off for another day as a civil servant in the construction division of Aomori Prefectural Government.

But on his way out the door of his home, in the hamlet of Shingo, he will probably give a nod in the direction of the mound of earth topped by a wooden cross that is the last resting place of the man that Christianity reveres as the Messiah.

"I'm not really planning anything at all for the 25th as it doesn't really matter to us," said 52-year-old Mr Sawaguchi. "I know I am descended from Jesus but as a Buddhist it's just not all that important."

Married with a son and daughter, Mr Sawaguchi may display the same degree of religious flexibility that is common in Japan, but his beliefs are firm. Jesus is buried in the neighbouring field, along with his brother Isukiri, and nearby are the scattered remains of pyramid that was larger than those in Egypt but toppled in an earthquake in 1857.

Seven hours north of Tokyo by train and bus, Shingo only had garlic farming to to put it on the map until a scroll was found in 1935 by a Shinto priest in nearby Ibaraki Prefecture that was identified as Christ's will and, bizzarely, identified Shingo as his last resting place.

The scroll is on display in the "Village of Christ Legend Museum," which closes in the tourist off-season between October and April, and is the basis of a very different take on the incredible tale.

According to the document, Jesus arrived in Aomori at the age of 21, where he took the name Daitenku Taro Jurai, studied the Japanese language and developed a deep affinity for the country and people. Eleven years later – conveniently the same period in the Bible that his whereabouts cannot be accounted for – he returned to Judea but fell foul of the Romans.

Instead of being crucified, however, the Romans got the wrong man and nailed his brother, Isukiri, to the cross. Carrying his brother's ear and a lock of hair from the Virgin Mary, Jesus fled across Siberia to Shingo, where he grew rice, married a local woman called Miyuko and had three daughters, it claims.

At the ripe old age of 106, Jesus died peacefully and was interred in the mound that sits on Mr Sawaguchi's land.

-- Julian Ryall, with a Christmas tale that's even harder to believe than The Tale of Christmas, in The Telegraph.UK.