Panda, There's A "Toxin" In Your (Student) Body 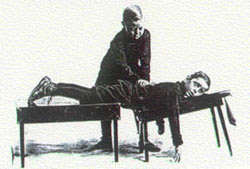 "Come on folks. The chiropractic theory of disease and treatment has no relationship to reality at all. I will never refer to a chiropractor any more than I would refer to a homeopath, a Reiki healer, or a shaman. They're all ridiculous and the idea that you who are supposedly the best and brightest, the most educated people in the country can't call a spade a spade is equally so.

-- Panda Bear, M.D., after watching the totally-embarrassing spectacle of a few ass-wipe NewAge quack apologists easily tying a bunch of student doctors in knots, on the Student Doctor Network Forum.

The "debate" (such as it is) starts here but I warn you: do not read this unless you want to witness something really, really depressing,....

And BTW - the fact that (supposedly) "real" doctors have already bought into homeopathy's terminology - of "allopathic" vs. "alternative" medicine - should be the first clue to just how bad things are out there. Like I said: