One Who Pushed Back (And Wasn't Nothing Nice) 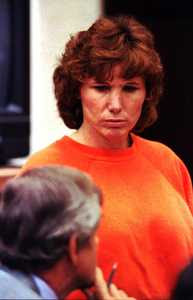 "Ellie Nesler, who sparked a national debate about vigilantism after killing her son's accused molester in a courtroom in 1993, has died of cancer. She was 56.

Nesler died Friday morning at UC Davis Medical Center in Sacramento, according to hospital spokeswoman Phyllis Brown. She had battled breast cancer since 1994.

Nesler made headlines when she shot Daniel Driver five times in the head in a Tuolumne County courtroom during a break in his preliminary hearing for allegedly molesting four boys, including her then-6-year-old son William, at a Christian camp."

I remember when Nesler acted and - like most people - until my divorce, I never understood the reaction she could have - not to the abuse of her child, but how horrifying things can become when "spirituality" is mixed with acts of depravity; the way the cover of religion can warp and destroy one's entire world view. I still don't think people understand it. I think the general perception of reality, out there, is far too shallow to appreciate what a mindf*@k that so-called "Christian" placed in this unsuspecting woman's lap - just as I don't think my NewAge ex, or her NewAge "doctor," comprehend what they've put me through. They don't have the intelligence, or the compassion, to identify with it.

My heart goes out to the family of Ellie Nesler: She deserved better - from all of us.