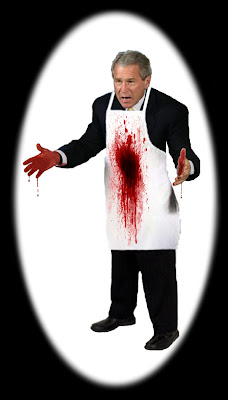 "I sometimes wonder if The New York Times is secretly in league with the country’s dentists. All the teeth grinding our former paper of record occasions must be good for those in the business of capping and crowning teeth. Consider, to take only the most recent example that comes to hand, the long piece in yesterday’s business section about who or what caused the current economic crisis.

I’ll tell you in a moment who really caused it, but let’s play a game. Your mission, should you choose to accept it, is to guess whom the Times would nominate as the prime mover and scapegoat-in-chief in the global financial dégringolade we’ve been living through. Ready? You have 10 seconds to come up with the answer. . . .

OK. Time’s up. Those of you who said 'Ronald Reagan' or 'Margaret Thatcher' get honorable mention, but you’re still playing last week’s game. No, it should be obvious to all comers that the only possible answer to any question involving political or economic failure is George W. Bush.

That’s right, folks. It was all George’s fault. Well, if you are Times reader (which is not the same thing as someone who happens to read the Times), you already knew that. Everything is Bush’s fault."

-- Roger Kimball, on the simplicity - and simple-mindedness - of life as a liberal (whose blindly knee-jerk opposition to everything Bush did caused no problems for the country what-so-ever) for Pajamas Media.