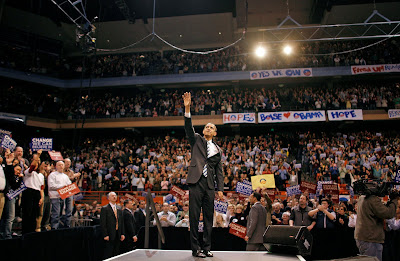 "Vote for my change, and I promise you more of Bob Gates at Defense, my rival Hillary Rodham Clinton (with help from Bill) at State, Gen. James Jones as national security adviser, Clinton pros John Podesta and Rahm Emanuel running my transition - and the evangelical pastor Rick Warren conducting my inaugural invocation. And what I am saying now about wiretaps, NAFTA, the Patriot Act, campaign financing, Iran, Iraq, missile defense, coal and nuclear power and taxes will have to be changed when I'm elected."

-- Victor Davis Hanson, on the ground-level reality behind (what many found to be) Barack Obama's souring words - which no one would've voted for, built a cult around, or had a reason to "believe" in - if they'd been carefully vetted by The San Francisco Chronicle.