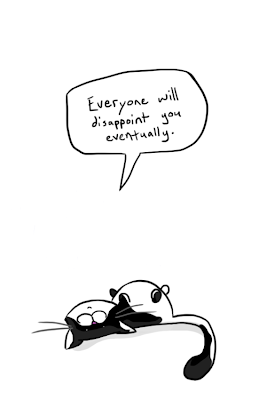 One of the most awful things about society's support for cultism is how it abandons those who have done, or are doing, the hard work of leaving these groups. The cultists who want their freedom, or recognize truth, but still find themselves trapped - this time by those outside of the cult - merely because they're too cowardly and/or non-judgemental to take the difficult stand ex-cultists have to take for their mental wellbeing or (sometimes) their very lives.

Here's an ex-Mormon, talking to someone on the fence, describing the rough intellectual road they had to walk after leaving, emphasis mine:


When I first found out that the church couldn't possibly be true, I felt the same way as you describe. I was happy as a Mormon, believed most people in the church to be sincere, honest, good people, and I did not want to abandon my tribe. I resolved to stay active in the church and to continue to live as I always had.

What I discovered over the next few months was how much I overlooked about the church as a believer. Without the backdrop of belief, I began to realize that the church is not such a great organization.

Consider tithing, to name just one example. As a believer, you give that check to the bishop with full confidence that every dime is going to be spent as the Lord sees fit. Once that belief is gone, you realize that you really have no idea how that money is being spent. You assume that the men responsible for allocating the funds are honest, responsible people for the most part, but you really have no way of knowing. You start to wonder why the church is so secretive about its finances. You research it as best you can and you don't get very far, but from what you can find out you begin to suspect that there's a good chance that the money is not going where you always assumed it did. And so it becomes harder and harder to give that money to the church.

Maybe this stuff won't bother you the way it did me. By all means you should stay in the church and try to make it work if you enjoy the community as much as you say. But don't be surprised if you find yourself noticing that it's not the great organization you once believed it to be.

As the Romney candidacy forces America to learn more about Mormonism, this realization is one we're going to come to eventually - but now as a society:


And there is simply nothing like realizing you've been deceived,...