More Proof I Haven't Changed (But The World Does,...) 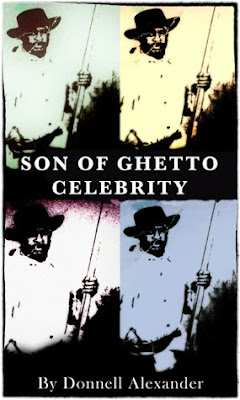 In 2003, my personal character was immortalized in Ghetto Celebrity, a memoir by journalist Donnell Alexander. In it, he said I was the only person he trusted, and one of the greatest artists he knew - and he knows everybody.

Now I just discovered Barnes & Noble has made it available for $2.99 as a Kindle "NOOK Book," under the title Son Of Ghetto Celebrity. (Why they changed the name, I have no idea,...)

I don't actually feature in the story, but it's still one of the craziest four-star reads, by and about a "real" black man's rise through the ranks of journalism, you're ever gonna get (I'm serious - sex, drugs, race, you name it - this book is so confessional, it's embarrassing) so, if you own one of those newfangled devices, all I can say is - at three bucks - this one's a steal: