"Wipe That Stupid-Ass Smile Off Your Face" - Ice Cube 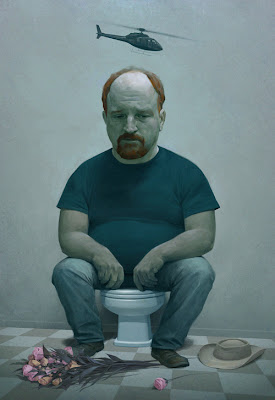 I've resisted posting this, mostly I think, because it makes me feel sorry for everyone who's ever tsk-tsked over my demeanor when they're all so fucking "happy" with being a collection of idiots:

Forcing yourself to cheer up can cause debilitating stress.

For a start, optimism is not always as healthy as it might sound.

Rather, being a Pollyanna can have a dark side, as shown by a long-term study published in 2002 in the journal Personality and Social Psychology Bulletin.

Psychologists followed the lives of 1,216 children who were first assessed in 1922.

The researchers, from the University of California, warned that the cheery youths grew up more likely to drink, smoke and take more risks.

This was most likely because their jolly optimism clouded their judgment and made the dangers appear insignificant.

The report concluded: ‘Although optimism has been shown to have positive effects when people are faced with a short-term crisis, the long-term effects of cheerfulness are more complex.’

Being glum also seems to be a far more natural response to difficult times, as it can enable us to cope better during tough situations.

This is according to a 2007 Australian study. Through a series of tough intelligence tests, it was found that people who were in a bad mood outperformed the cheerful participants.

‘They made fewer mistakes and were better communicators,’ said researchers.

‘In contrast to happy types, miserable people are better at decision-making and less gullible.’

I'll stop there. Yep, it's our old friend, Gullibility, just as I've said - you poor things:

Dealing with complexity can be a real downer, but - hey - stay positive:

I'll be sure to attend your funerals - happily,...