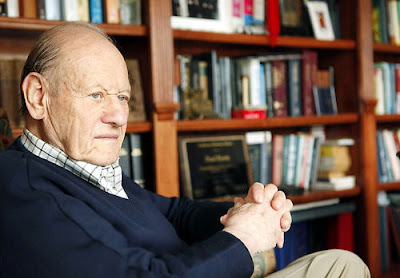 This man did so much, I'd be here all day trying to list his accomplishments. Here's an obituary from The San Francisco Chronicle where they try.


"Neo-humanists do not believe in God, yet they wish to do good. But if this moral outlook is to prevail, then neo-humanisms need to concentrate on improving the things of this world rather than simply combating the illusions of supernaturalism."

His little magazine, The Skeptical Inquirer - a pamphlet, really - was my first introduction to the idea there were others who thought (somewhat) as I do, so I'll be forever grateful to Mr. Kurtz for providing a way for me to know I wasn't as total an anomaly as I'd thought. I still have every issue of S.I. I've ever owned.

Of course, I'm not a Neo-Humanist, or even a Humanist, and the lame coverage of Mr. Kurtz's death is a fine example why:

I am losing respect for/developing a profound ambivalence towards people, from knowing they can't even sufficiently recognize a man who dearly loved them, and in the face of their nonsensical beliefs, exalted simple reality not only for his but their benefit.


As an atheist, it's just too much for me.


Mr. Kurtz probably wouldn't have agreed with my worldview - actually, I'm sure he wouldn't - but that's alright:

I admired him for transcending it,...