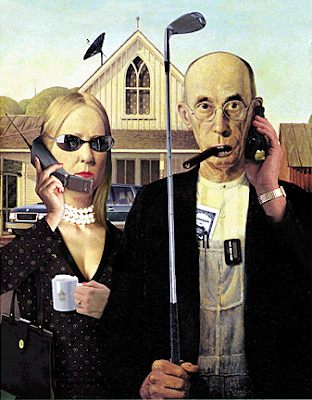 "I offer no apologies,...for thinking our education, entertainment, public morality and manners, as well as popular ethics, have all devolved since the 1960s. In the present arrogance of this age, we seem to think that everyone of the past, before being enlightened by the 1960s therapeutic generation, was either a bigot or sexist.

A,...unscientific anecdote: I remember my grandfather (died on our present farm in 1976 where he was born in 1890), as he walked through Selma, paying his bills in person (and usually in cash), with 'Yes, sir' to those who had far less money than he, or spoke only poor English. He endlessly worried about the occasional deleterious effects on us of watching an 'adult' and sometimes 'violent' show like Gunsmoke with him on Saturday nights, and as a treat offering us (my two brothers and me) one Frosty 7 oz. Rootbeer per week from his private stash, and apparent only obvious sinful splurge. In such a supposedly biased and Neanderthal age, he mortgaged his 120 acre farm in 1939 to stay alive, and, strange to say in such rough times, to ensure that his two daughters could go to Stanford University, a third, crippled with polio, he sent to San Jose State where he arranged for a helper to watch over her. He paid off those debts promptly by the 1950s, as contracted. I think he was more the norm (readers will immediately cite similar even more unusual examples of their own kin) than the caricatures of illiberal Americans in the age before the CSU Monterey Bay curriculum saved us all.

Once again, I note,...critics on the hard Left continue to lack humor; when they should be ecstatic with the triumph of Obama and the new majority in the Congress, they seem instead curiously consumed by their petty anger and bitterness.  And now even the ritual totem George Bush is gone at which to chant and revile. No matter; this is a wonderful country and we are so lucky to be alive in the here and now in the United States."

-- Victor Davis Hanson, saying many things I'm thinking - but in a classy manner that embarrasses me for how much better it is - but that's Pajamas Media.