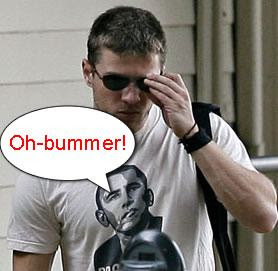 "I've watched with growing distress this past week as many interesting cultural iconoclasts I admire for various reasons who can usually be counted on to be aware and skeptical of government power to at least some degree, from John Perry Barlow to Adam Parfre to Oliver Stone, have swooned over the mighty Obama and his world-changing powers (my misery over this is maximized by many friends and acquaintances who are not public figures as well).

Being surrounded by a creepy-happy adoring Cult of the Great Leader makes me...uncomfortable, to be sure. Via Will Wilkinson comes a particularly awful example of Obamania, in which we are advised via Beatles lyrics both of our responsibility to not let Obama down, and also showered with the adoring love we must express for him."

-- Brian Doherty, joining the ranks of political folks who don't think TMR is crazy after all, but showing a lot of Reason.