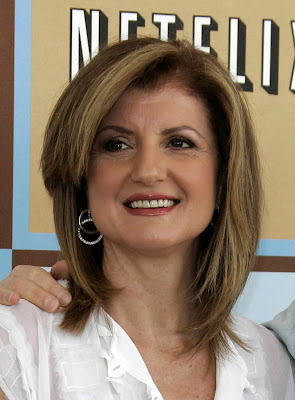 "So I’m standing in line waiting to board the flight that will bring me home to Los Angeles from the Federalist Society convention in DC. An upgrade has me in first class, so I’m happily waiting my turn as # 3 in the red line. Just as boarding started, Arianna Huffington comes dashing up, chatting on her cell self phone, and cuts right in front of me.

I quip, “so much for change we can believe in,” which earns me a dirty look but no apology.

I guess when you’re a Democrat Diva you don’t have to be polite to the little people. Or wait your turn."

-- Stephen Bainbridge, getting a crash course in what kind of "nice" NewAge behaviors The Huffington Post's Arianna Huffington learns from her guru - which she forces her employees to learn as well - which he dutifully describes on Punditry. 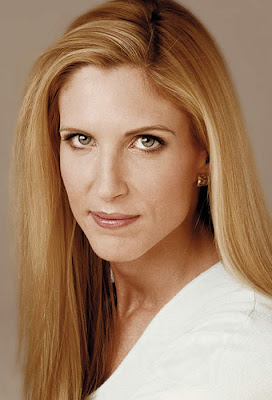 Just for comparison, one commenter added this:

I’ve heard that Ann Coulter is actually a decent person in real life.  No, really, the obnoxious message that she delivers on a daily basis is just an act, a way to make a (handsome) living and keep herself in the spotlight.  In person, she’s decent to everyone around her, tips generously, and never acts like Arianna.

Funny how that works."

Yea, it's a real knee-slapper, those little glimpses into the hearts of NewAgers vs. everyone else. I had the chance to watch that charade for 20 years, and it's the *little things* that always give it away: 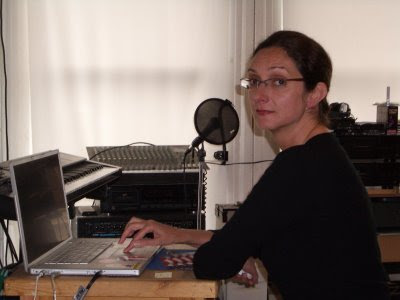 I'm thinking of a visit I took with my NewAge ex-wife, Karine Anne Brunck, to a San Francisco Farmer's Market. While scanning a fruit stand, Karine decided she wanted to taste some, and she looks at the guy behind the stall and says, "Do you mind if I try it? - no, you don't mind." and proceeds to eat the fruit and spit out the seeds.

I'll never forget the look on the proprietor's face as he grasped that she was one of those supremely rude people who, for some reason known only to them, decides they are entitled to deny others the right to their humanity. As he looked at me, I remember turning to my wife and wondering what kind of person I had married - was she a sociopath? A psychopath? Surely, she was mentally ill, but it was hidden behind this carefully-constructed facade of (what others see as) European sophistication. I asked her what she thought she was doing, and she looks at the guy and says, "He doesn't mind.", completely oblivious that he was too polite to correct her himself, and because, at this point, he hoped to at least make a sale.

As Karine strolled away without a word to the man, I apologized and handed him a buck, and then me and this NewAge bitch continued to "careen" to (what is now) the obvious conclusion of our divorce.

*Also: I try not to re-use photos, but I've kind of fallen in love with this particular one of Karine, above, because it's from after she and "Dr." Robert Wohlfahrt started having their affair. (I know this because of her extreme weight loss and the fact she hardly ever used the computer.) From the look on her face, I can now see 1) she was writing to him as this photo was taken 2) she knew she was busted but thought, since it was being carried out in French, I was too dumb to ever discover what was going on, and 3) she hated my guts but wasn't going to tell me until she had her plans perfectly mapped out - because she's so fucking nice and honest.

And I remember one time, during this period, hearing her say some crazy NewAge-y thing and replying to her, "You really need to get some smarter friends. Start hanging out with doctors, or scientists, or something." and (with a knowing look) Karine replying, "I'm thinking about doing just that." As we can see in this photo, this a-hole seriously thought she was being fucking smart. It truly boggles the mind when I realize how short-sighted and dumb she actually is.

But now, together, those two NewAge idiots have killed two people in France (three, if you count Karine's mother, and I certainly do) which ought to put things in some kind of perspective. I mean, if nothing else, isn't the effect NewAge has had on the lives around this one woman delightful?

It's like all of Karine's NewAge dreams have come true,...with nothing but her "brilliant" mind - and her belief in "energy" - she's finally changed everything, forever.