American Patriotism Ain't About A Color, Is It? 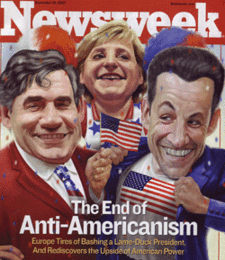 "I'm delighted that Barack Obama has been elected president and that foreigners are delighted, too. But I never viewed eliciting delight from non-Americans a reason for choosing a president, including one of color.

No other people so fervently seek the admiration of others as do Americans. On the left, that tendency is obvious. There has been much talk of Obama 'rebranding' America as a liberal land of race-blind equality. It is remarkable how many Americans, young people especially, yearn for an 'openness seal of approval' from people in countries whose records on racial integration is worse than ours.

...Europeans do like to critique the United States, and Obama's election has them responding with awe. That's fine, but their acclaim is based on an outdated notion of American race relations.

There's no denying the tragedy of slavery and Jim Crow -- and their legacy is yet to dissolve. But Obama didn't have to happen for the world to see African-American advancement unmatched in any other majority-white country. The United States has had black generals, senators, secretaries of state, governors and CEOs of Fortune 500 companies.

Yet you have French political analyst Dominique Moisi quoted in The New York Times thusly: "In this election, the Americans not only chose a president but also their identity." In addition to trying to figure out what he meant, you wonder where he's been."

-- Froma Harrop, tripping on everybody tripping on American race relations (and not their own) which is getting back to Real Clear Politics.