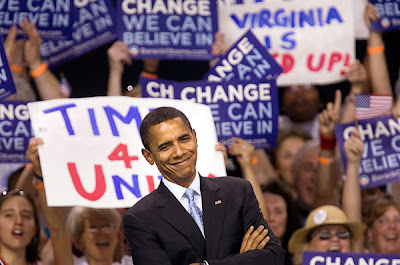 "Comedic gentleness, and sometimes desperate, explicit support, tells us something of the nature of the Obama phenomenon amongst his liberal cheerleaders: they want to believe. If they stare too hard, too critically, if comedians on The Daily Show or Late Night parody or mock Obama, perhaps with a sly dig here or a slicing barb there, then there’s the perceived risk that the whole edifice of Obama’s near mystical appeal will collapse. It’s as if comedy fears to tread lest it break the spell."

-- Tim Black, once again reminding us you can't make fun of a cult leader - no matter how ironic it is that so many so-called "independent-minded" Americans now find themselves following a cult leader - on Spiked!.