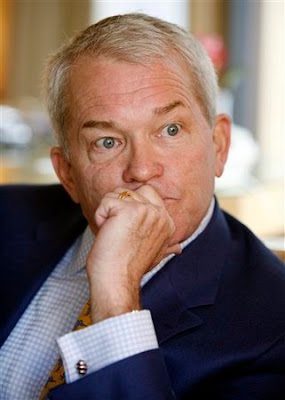 Former Rep. Mark Foley, R-Fla., was interviewed a couple of days ago about life after those computer messages to former male pages on Capitol Hill, "just to free himself from the media clamoring for his first interview", and TMR is impressed. Unlike some men who messed up but continue to defiantly parade their hypocrisy before us (Bill Clinton, Gavin Newsom, Antonio Villaraigosa, John Edwards) Mr. Foley seems to be giving what he's done some serious thought - and to be truly sorry.

While not all of his answers pass the smell test - which can happen when someone is working through serious personal issues - no one should doubt that's what Mr. Foley appears to be doing:

"There was never anywhere in those conversations where someone said, 'Stop,' or 'I'm not enjoying this,' or 'This is inappropriate' ... but again, I'm the adult here, I'm the congressman. The fact is I allowed it to happen. That's where my responsibility lies."

When was the last time you've ever heard a politician talk like that? True, Mr. Foley is a Republican - the party with actual standards of behavior and less tolerance for hypocrisy - but still, Mr. Foley seems to be going deeper than even his party demands, and, for a formally very-public person ("attending lavish parties and fundraisers with the likes of Donald Trump, Jay Leno, and actress Bo Derek") this is not only to his credit but almost unheard of. He's doing what's supposed to be the hard work of re-building his character the old fashioned way: by just getting on with it and doing it.

This blog spends a lot of time trying to encourage clear thinking and personal responsibility, and it's an extremely proud day when TMR can point to a Gay man and say it's found a standard bearer for the very behavior it wants to see exemplified out there. Mark Foley's been hurting, but he's also not fooling around (no pun intended) and, in doing so, he's showing a lot of integrity, and for that he has the full support of this conservative.